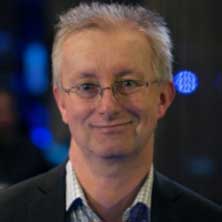 Founder and Editor of Sixteen:Nine

Dave Haynes is the founder and editor of Sixteen: Nine, an online magazine that has been following the digital signage industry for more than a decade.

Dave also works as a strategic consultant for many industry users and suppliers, and also writes for many of them.

PARTTEAM & OEMKIOSKS asked some questions about Dave Haynes and about digital signage trends. Read on and know the story of Dave Haynes, editor and founder of Sixteen: Nine.

1. Tell us a bit about your personal career history and what brought you to this industry ?

I started my working life as a daily newspaper journalist - covering everything from early ‘80s rock music to national politics.

Eventually, I became an editor and in the mid-90s, grew interested in emerging technology. I took my newspaper online in 1995, and a few years later realized the evolution of the web was going to be very problematic for the newspaper business, so I got out while I could. I joined a well-funded startup putting screens in elevators, and within a year, I was the company’s VP Operations.

That company was merged with a competitor and that I lost out when management teams got blended. But I stayed in the business, doing consulting and launching my own digital ad network in the underground PATH walkways of downtown Toronto.

It was a great concept but probably five years too early for advertisers to understand.

So I started working for other people. In early 2006, I started a blog called 16:9 as an outlet for my impressions of the digital signage industry, and some of the people who were putting out nonsensical advice and opinions.

Twelve years and almost 6,000 posts later, I am still at it and that little blog is the centre of what I do. I write just about every day, and also do writing for other clients. My experience has also pulled me into a lot of consulting work, from start-ups to Fortune 100s.

2. Why did you create the Sixteen:Nine and why did you choose this name ?

I felt there was an absence of coherent, independent reporting and opinion in the industry back then, and Sixteen:Nine addressed that need.

Most of the trade publishing in this industry continues to be re-purposed press releases, advertorial or “puff” pieces written to please advertisers.

I don’t do that, but I’m also not nasty or unfair. Just measured and honest. Sixteen:Nine relates to the most common aspect ratio flat panel displays. I wanted a name that was more interesting than, say, Digital Signage Daily.

... I’m also not nasty or unfair. Just measured and honest..

3. What's the biggest challenge of being the founder of Sixteen:Nine ?

Finding the time to write and, frankly, finding interesting content. I get 20-40 emails a day from PR firms and publicists pitching me on new products, services or projects, and I ignore probably 95% of them. I try to isolate and highlight those things that are new and different, or at least meaningful.

4. What is differentiating DOOH from other areas of digital signage innovation?

I think the big thing with digital out of home has, for some time now, been the use of data.

When you can then plug in and use real-time data - whether that’s audience analytics or venue management systems, or whatever - what’s on the screen can correlate directly to what’s going on, right there.

One of the most interesting products I have seen recently is a company that uses camera-based audience measurement tools to analyze queues for food counters and restrooms at sports venues, and uses dynamic content on displays around the concourse to direct people to the shorter lines.

5. What advice would you give for a customer that is reading this and going to use digital signage for the first time ?

When I do consulting, my first question is always: “Why?” It’s never about the screen or the other tech, it’s what is on the screen. No screen or kiosk network should go in unless there are really clear objectives, and and understanding of how they’ll be measured, assessed and met.

One of the tools journalists use for researching and writing stories is answering the 5 Ws - Who, What, When, Where and Why? When a signage project is put together, I’d encourage anyone to apply those questions. You’ll be amazed how often no one on a project actually knows Who will be responsible long-term for the project, and so on.