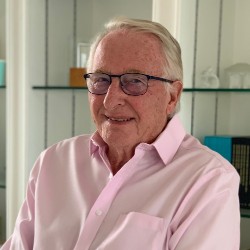 Joseph William Foster, with his brother Jeff, founded, in 1958, Reebok – following their family heritage back to 1895. Joe Foster's grandfather had already created the spiked running shoes.

With Reebok, Joe Foster and his brother wanted to follow their grandfather's footsteps, developing – in addition to shoes and sneakers – high quality sports clothing and accessories.

Now retired, Joe Foster is about to publish a book about his experiences and professional journey, being the special guest of the Connecting Stories series by PARTTEAM & OEMKIOSKS.

1. Founder of Reebok and about to publish a book, tell us a little about your personal career and your professional experience over the years.

Leaving engineering college, I joined the J. W. Foster company, established in 1895 by my Grandfather, Joseph William Foster, and only one year later was conscripted into National Service at the age of 18. I served two years in the Royal Air Force as a radar operator, when not playing badminton, returning to the family business in 1955.

With my older brother Jeff (Jeffrey William – we were all JW’s), we left the family business to set up our own Sports Shoe operation in 1958, initially named Mercury Sports Footwear and renamed Reebok Sports Footwear in 1960. 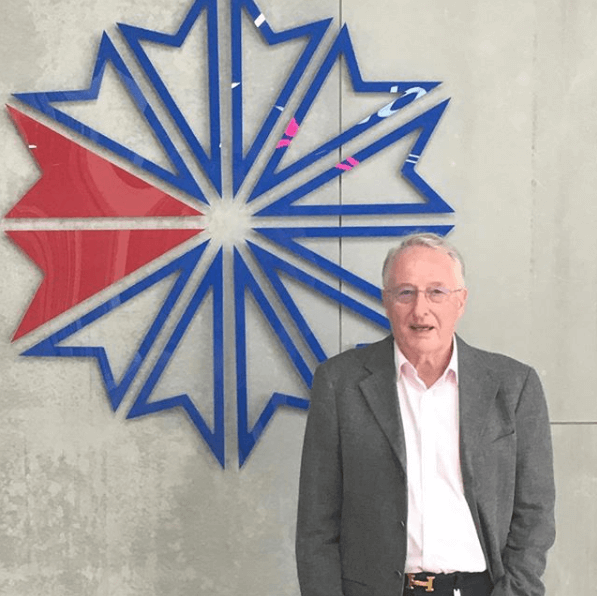 Initially, it was difficult to be accepted by the retail trade and we had to develop unique sales methods to get to our consumer, which built to Reebok an incredible reputation with athletes.

But my main focus was to break into the much larger USA market and eventually, with 10 years of travel and market experience, I had the good fortune to meet Paul Fireman, which was the start of building a global brand. I was about to spend the next 10 years building global distribution, ending my full-time career as the global ambassador for the brand.

2. Reebok has 62 years of existence. How was this brand born and how did the name for it come along?

The answer to how the brand was born is contained in the above, but the rename of the company came about when we were advised to register the Mercury name. To our disbelief, we were advised the name Mercury was already registered as a footwear brand in the UK. We were given the option to buy the name, or find a new one. 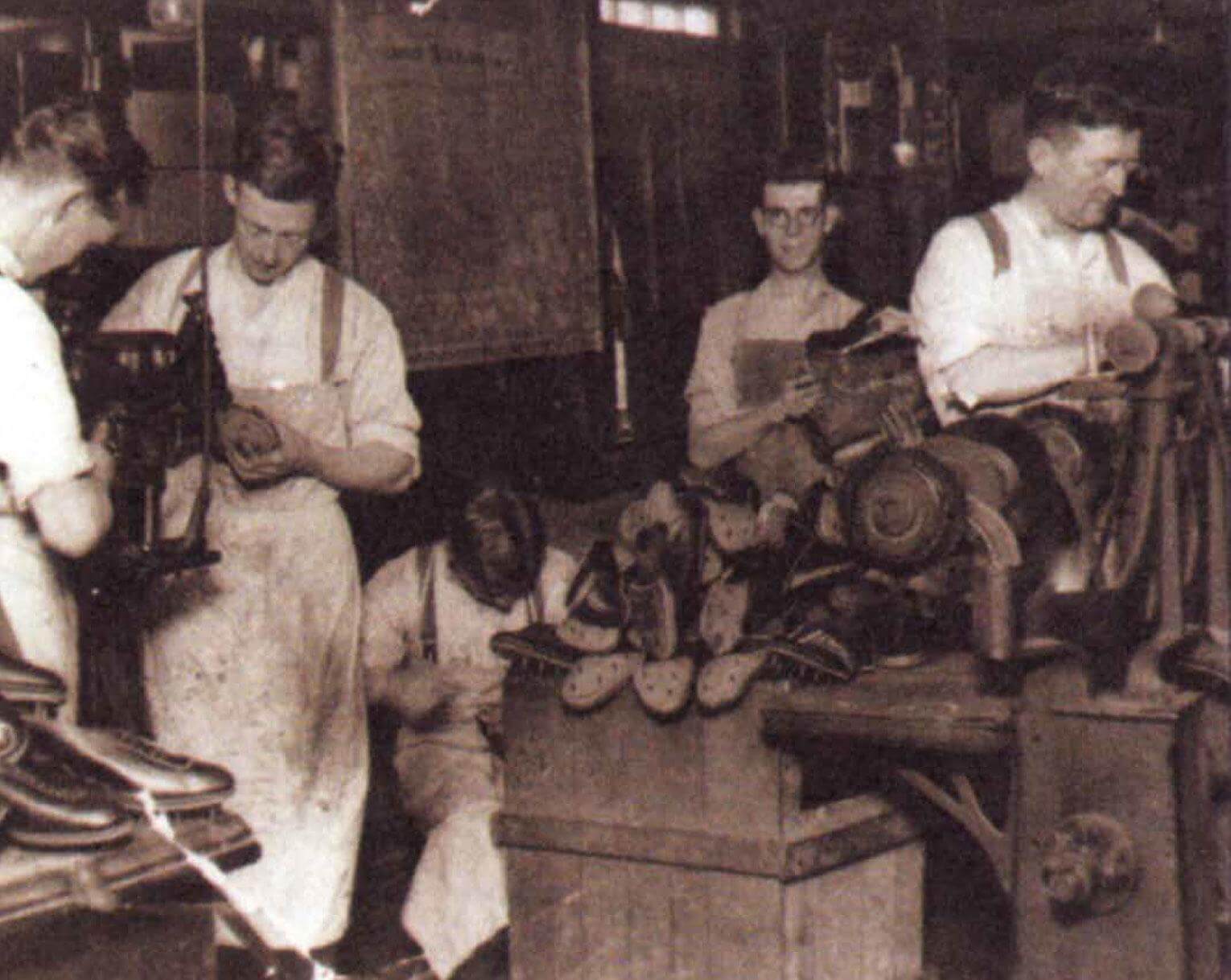 We didn’t have the money to meet the asking price so, with the advise to present at least 10 names to the register, we set about our search. We had a lot of animal names in our selection, but out of the blue, as I searched through an American Websters dictionary, which I had won at an athletics event in 1948, I came across Reebok – a small South African gazelle. Seemed just right and as a result of a search of the register, it was the only unregistered name of all we had presented.

3. What makes a product successful in your opinion?

It needs to be state of the art and worn by ‘influencers’, who add credibility to the product.

4. During the years you were at the head of Reebok, what were the main challenges you found?

There were many challenges and, in a way, one would contribute to another. We didn’t have the money to get into the volume sport of Soccer and it wasn’t our expertise. After a short period producing cycling shoes, we concentrated on athletics, where our grandfather had had his success. This is where we built our reputation, but volumes were small compared to soccer and visibility of the brand was restricted. We needed the bigger market of USA, where Track and Field was a big part of the education system. 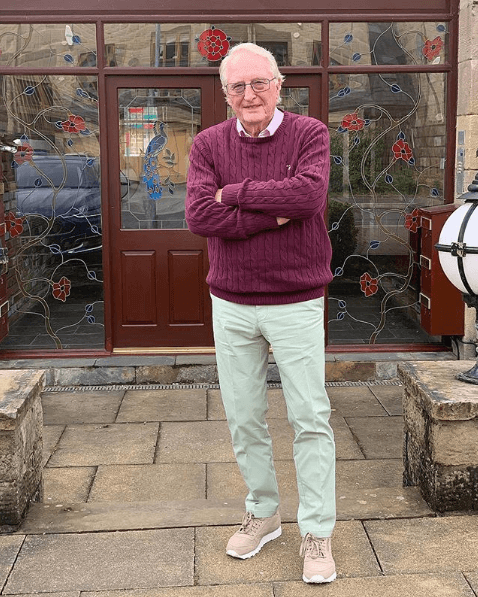 My first venture to the USA was in 1968 at the National Sporting Goods show in Chicago. Lots of interest, but the American retailers didn’t understand ‘importing’. I needed a distributor and, after another 10 years, I found one. By this time road running was booming.

Our small factory in the UK would never cope with demand, a challenge I had envisaged and had turned to a friend at Bata UK to assist. This answered the volume, but initially provided production problems and although these were quickly answered, their price was not competitive compared with far east production. Again, this challenge had been anticipated and I was to take the journey of a lifetime to visit factories in South Korea to see the quality – it was good. But this brought the next challenge – financing. We found the answer and Reebok went on to become the No. 1 sports brand in the late 1980’s.

5. How Reebok has evolved over the years?

The above covers my active time at Reebok, when we became the No.1 sports brand. Since then the brand appeared to lose its way towards the end of the 90’s and didn’t find a way to continue growth. Eventually, as we know, the brand was sold to Adidas, who was looking for a way to improve their footprint in the USA. This worked for Adidas, but the Reebok market share did not improve, probably through lack of attention.

Now, my understanding is that Adidas wish the Reebok brand to position itself as a fitness brand, to revive the fantastic success the brand had with Aerobics. Reebok has now chosen to simplify its image by predominantly using the ‘vector’ logo and returning to the Motter Tectura script with the dropped R for the Reebok lettering.

I think this is a good move and will provide a clearer message for the future as the image is seen on their influencers, such as Ariana Grande, Gal Gadot and Gigi Hadid, together with their association with Victoria Beckham. And I trust my book will give younger people an insight into the depth of history and innovation, which is the heritage of the Reebok brand as we move deeper into the digital age.

It has to be belief, persistence and never giving up when faced with the many obstacles and challenges that building a brand presents you with.

6. What was Reebok's secret ingredient to achieve success?

It has to be belief, persistence and never giving up when faced with the many obstacles and challenges that building a brand presents you with. On top of this you have the factor “luck”. We were there when the ‘Running’ market arrived and later, Reebok not being so well known in the USA, were excellently placed to become a Women’s Fitness company with the arrival of Aerobics.

7. You are about to publish a book. Can you advance the topic? What can readers expect?

The book will take you back to the history of sports footwear development and marketing. You will see that, over 100 years back, my grandfather, Joe Foster, knew how to use ‘influencers’ to sell his lightweight hand sewn pumps (spiked track shoes). He supplied many, if not most, Olympic Gold medal winners and World champions in the first two decades of the 20th century. He died over a year before I was born on what would have been his 55th birthday.

Description: Joe Foster will publish a book in September about his experiences and professional experiences

Fate has it that even with the early death of my brother Jeff I was able to find the right team to take Reebok to the No. 1 Sports brand. The book is going to be published on 17th September 2020 by Simon & Schuster. Signed copies will be available from website, click here.

8. What tips would you give to someone who wanted to start their own business?

Depending on what your ambition is and whatever your product, you must know your market and how to influence and finance it. Unless you have access to finance, this will probably mean being prepared to release more than a controlling share of your company.

The marketing world, through social media, is changing brand visibility and availability and Digital Signage is growing as the way to influence markets.

9. As a brand driver, and as PARTTEAM & OEMKIOSKS is a company that develops and manufactures multimedia kiosks, self-service equipment, digital billboards, interactive tables and other digital solutions for all types of industries, what relevance has, in your opinion, Digital Signage in Reebok's strategy?

The marketing world, through social media, is changing brand visibility and availability and Digital Signage is growing as the way to influence markets. The digital age has come a long way since I was in an operational role. The world, including myself, is attached to some kind of digital device for a huge part of their day so it must be the way to influence your particular market.

I can give you an example of this from my own experience. My stepdaughter lives in Bangkok. There they have a skytrain. The main station is Siam. This is elevated and the massive digital signage is very much in your face while you are waiting for the train. There were superb Adidas advertisements I had never seen before plus an Apple advertisement that saw us promptly purchase the new iPad! We didn’t really need one and we had not been stood waiting for a train and seen the huge digital and we might not have bought one for some time. So, it works!