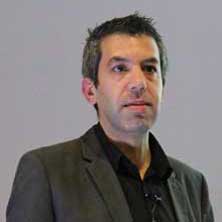 Communication and Innovation Agency Key Content, specialized in new technologies applied to the Media, Tourism and Cities sector, being one of the European Stakeholders related to Smart Cities.

With more than 24 years of professional radio and press experience, as a journalist, editor, director and founder, Vítor Pereira was honored with the Smart Cities Live 2015 Personality award, awarded for the first time in Green Business Week.

1. Vitor Pereira is Co-Founder and Director of ZOOM Smart Cities, one of the main international events of urban intelligence in Portugal. Tell us a little about your journey and your professional experience. What is your interest in this subject ?

I've been a journalist for over 20 years but I've always done more than journalism and radio. "I founded" my first "startup" with 11 years to sell and later to program ZX Spectrum computer games for the whole world. One day I got to my mother and asked her to buy me a "Kiosk" so the sale could be even more professional. But I didn’t get more than a tug of ears and a warning to be more judgmental.

I've always been self-taught in technologies and learned to use virtually every design and programming tool. From then on, I began to do more communication projects integrated in a global strategy, mainly directed to regions and cities until it became incompatible with journalism and decided to embrace a different project in a communication agency specialized in innovation and disruption of concepts, products and services. We launched the first applications of Augmented Reality in Portugal, the first cities with interactive guides on the mobile phone, the first newspapers and magazines with applications, etc.

From here to smart cities was a small step since already in 2009 I started to actively participate in events and to work with other international partners from other cities.

I launched a series of contents, own thoughts, new ideas, some philosophy, including those who considered me (and consider) a romantic of the cities because the passion and closeness that I was trying to print were shared around the world at the time, in 2012 / 2013, when everything was just pulling into the smart cities based on technology.

There was not much talk about citizen engagement, placemaking, circular economy, resilience or climate change, but there was talk of people, humanism, and the need for a "platform" for human interaction in cities.

Between collaborations with Amsterdam, Barcelona, ​​Canada and London, the opportunity to organize a great international event in Portugal ended up happening and SMART TRAVEL happens in 2014 that had the great effect of changing the trend of the events of that time, joining, for the first time , the tourism topics and cities under the word smart.

Since then events have been a constant. Not as a business model but above all platform of transmission of ideas and experiences and sharing. Always in a relaxed atmosphere and also with specific purpose to mark the current and the trends.

At the moment, I am involved not only in events but in support of cities and regions, working what cities need most at this stage (and are not sensors or data): the initial strategy, blueprints and action plans to ensure that a project smart city has legs to walk and does not end in a drawer.

At a time when in Portugal there are "summits" for everything, ZOOM SMART CITIES is an event that everyone recognizes as a guarantor of certified information on these topics. And not only in Portugal, the event, with only 2 editions became a global reference for the quality of the present speakers but also for the content.

We know that events nowadays try to be more festive and entertaining, but ZSC's strategy has always been a careful selection of who is on stage and watching. It is a moment of sharing, contacts and obviously business.

It is not worth hiding that there is no business model associated with smart cities, it exists and everyone can perceive it, but it is fundamental that everything is done in a transparent way and that there is no doubt about the independence of entities and institutions that deal with public money.

It is essential to certify and credibility of businesses in smart cities and that is why an independent and serious entity will soon emerge with the aim of supporting companies such as cities and governments mediating all these aspects that are sometimes incomprehensibly neglected.

The ZSC is also the ideal time to inspire new business, new solutions and actions and comfort even the most skeptical and technology-resistant, because what is evident to everyone right now is that being a smart city is no longer measured by zeros and some.

3. Vitor recently won the People's Choice Award from the Internet of Things World Series as part of the Smart to Future Cities Summit conference. What does this recognition mean to you?

I was integrated into this final list of 7 out of 40 nominees and of course I felt honored and happy and of course I also promoted a small campaign because the voting was online.

What motivates me most is the recognition that what I have been doing is not in vain and what I have done most of the time is to spend immense energy and resources to idealize and design, to draw and to execute things that at sometimes we do not even know if they are going to work but are unique, born of creativity and the will to do something different.

It is the recognition that the idealists, romantic, dreamy, creative, rebellious, etc. are still the ones that make cities evolve, it is still this group that promotes progress, philosophical thinking, inspiration, drama, happiness in our society. And this is clear in all cities except those who just want to be "happy" or just "smart." There is much more than jargon or buzzwords in a city. 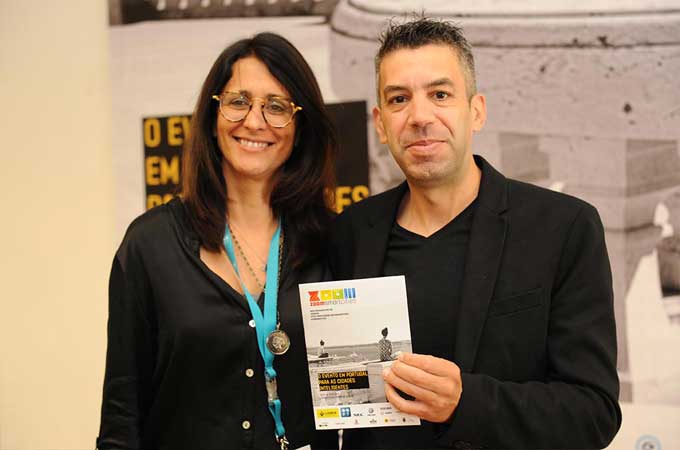 4. Explain to us what you mean by Smart City and how do you find the development of Smart Cities in Portugal and in the World?

The concept of smart city obviously has an origin and a connection to the world of technology and the digitization of services and processes.

It is born with this purpose and there are cities that need to implement it urgently in order to optimize resources, guarantee sustainability and efficiency in the most diverse sectors. But the lack of financial and human resources, the low practicality of the projects and the poor return of the projects also meant that, for example, giving up technology or adopting a more economically sustainable solution became a sign of intelligence. Intelligence in management, leadership, strategy.

One of the problems we face today has to do with making urgent and important decisions for the future. It seems increasingly difficult to make this decision because often the fear of not being understood or accepted compels calculations. And technology, through data and artificial intelligence, is serving as a "scapegoat" to support such decisions. But it is also true that if we are going to have computers to decide everything then we do not need politicians, we do not need leaders who risk deciding, who take courageously ideologies or policies, with errors certainly, but perhaps less onerous than leaving algorithms on the loose to decide practically all in the cities. 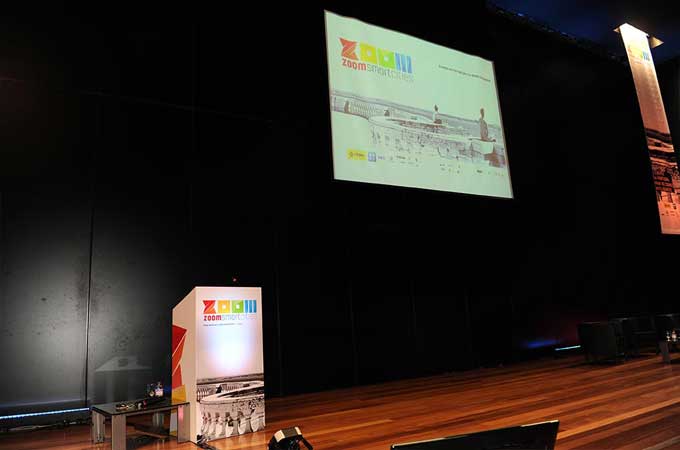 There are things that machines can not decide, and above all, we can not fall into the temptation to blame machines for any problems that may occur in the future.

It's tempting, but smart city is not just that. Not only cars without drivers, or just sensors, or bikes and sensors, will not happen in the future. More than just let algorithms return them, too bicycles and surveillance systems. These are elements that all cities will have sooner or later. What will make the difference will be to assume that a return is necessary, to return to the principle of the Polis in which the debate, the empathy, the inspiration and even some rebelliousness, are present in the decisions of the day to day. Because, I say again, if we are governed by algorithms, I fear that some layers of our society will be in danger, which is already happening at the moment.

The perfect city does not exist because humans are not perfect and the smart city can only exist with a leadership strategy and responsibility in making decisions.

5. How do you think the cities of the future will be? Are Portuguese cities assuming more defined strategies in the Smart Cities ?

Overall, there are good and bad in every city in the world. Very good things are being done and others not so good is not something that is exclusive of Portugal or another country. There are concerns, however, regarding some strategies to promote technologies that are inconsistent with climate change discourses or skilled employment for example. Or even social cohesion.

A few years ago the sensors were in the rubbish bins, and we all applauded this great evolution of optimizing routes and saving resources to the public purse. But this caused, for example in Barcelona, ​​a multi-day strike of the company of collection and garbage that began to feel their jobs threatened.

They are fragile layers of our society that must be taken into account. Sometimes being smart means keeping a job that costs less than the technology that will replace it, whether in the trash, in the treatment of green spaces, in transportation, etc. As long as the states do not assume the ideology of guaranteed income (something that does not yet exist), it is necessary to keep these jobs, if not for their solidarity.

Another problem that cities will have to face is aging and depopulation. Big cities are growing exponentially creating problems that are totally different from those of small and medium-sized cities that lose population. It is not worth waving with unmanned vehicles and other technological gadgets if there is no population to use them. More than retaining talent, cities must attract talent and some should already start to bet seriously on agriculture, the arts, the preservation of the authenticity and genuineness of natural spaces, gastronomy and so on. 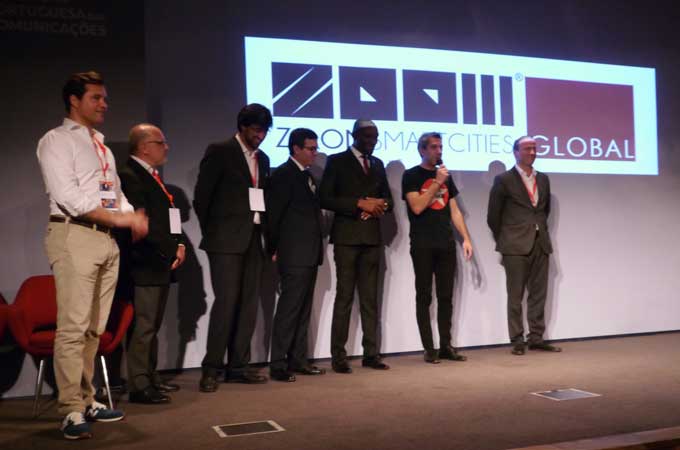 I welcome cities in Portugal and the world that are taking important steps to ensure that smart city takes root and eliminates a number of factors that limit the progress and framing of transversal solutions. I also see problems in some cities such as Lisbon, for example, in an apparent schizophrenia and bipolarity regarding such important issues as tourist massification or housing. It is difficult to keep balances these days, it is better to assume what pains are and, without flourishing and without mixing political ideologies, to try to solve seriously.

A company that inspires confidence and whose main quality I also mentioned before, lies in the quality of leadership and strategy. Like cities, too, companies must focus on creativity in innovation and risk.

PARTTEAM & OEMKIOSKS took that risk, innovated, managed to be competitive in a complex and globalized market, and only the attitude and vision to create and develop new things guaranteed growth and sustainability.

I congratulate the entire PARTTEAM & OEMKIOSKS team on what they have done and continue to demonstrate and inspire others with your success stories.